fEven though last night ended with a few drams together with a new whisky-friend, Olaf, from Germany at the Duffies bar during the Jam Session, we were both eager to get up and going this morning. Today we changed hotel from Harbour Inn, where everyone has been SO nice and helpful, to Bridgend Hotel in Bridgend – right on the most important crossroads where the road either leads to Port Askaig, Portnahaven or Bowmore/Islay Airport/Port Ellen/Ardbeg.
Christine picked us up at 9:00 and we had booked her the entire day. She had very kindly changed our arrangements with Kilchoman and Bruichladdich distilleries so we had plenty of time for both.
On the way to our first stop of the day, Kilchoman, we ran into Bryan Palmer of The Ileach, who is a bike fanatic. In keeping with our mission for Merlot Tours we stopped and had a wee chat with Bryan leaving him Peter Kobbernagel’s business card. He seamed very enthusiastic and would himself write an email to Peter. So it looks as if your bike-fact-finding-mission is completed successfully.
Trough narrow and twisty roads not all of them with a decent surface we made it to Kilchoman Distillery. The manager/owner, Malcolm Rennie, showed us around the smallest distillery we have ever seen. He was passionate about this business and we had a sample of the fresh spirit and another that had matured for two years. The first distillation took place at Kilchoman in 2005 so later this year the first real Scotch’s Whisky will be released from Kilchoman. We can only say that we look forward to that because the fresh spirit was very tasty indeed and not at all “Feinty” in any way. Malcolm operates the distillery with his family and the site also features an excellent café where we would have stayed for lunch if we didn’t have an appointment at Bruichladdich to keep. The entire experience at Kilchoman was very interesting and we saw the complete process from Barley to maturation. The only thing missing was bottling but that was coming according to Malcolm. Kilchoman gets our highest and best recommendation. Do go visit him if you ever find yourself on Islay and also you can look forward, as always, to pictures and updates on the Kilchoman pages and on our special Islay section coming shortly.
From Kilchoman Christine took us to Bruichladdich where we had a special appointment with CEO Mark Rainier. 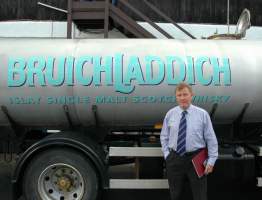 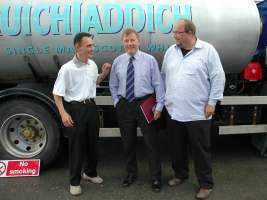 Let me start right off by stating that the visit to Bruichladdich topped ALL our other distillery visits during our stay at Islay. Mark is a guy who is passionate about everything whisky: whisky history, whisky making, whisky maturation… You name it; Mark will know everything about it. He gave us the almost complete history of the lost still Octomore where he had researched everything himself. It is a fascinating story which you will soon be able to read right here on the whisky pages. 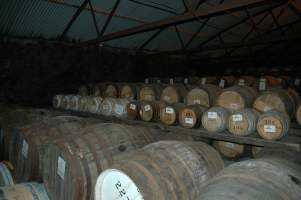 Mark was practically unstoppable in his passionate retelling of the story of Octomore. He did end the story though and then took us himself on a very special guided tour of Bruichladdich distillery. We saw EVERYTHING! We went through all the steps as at all the other distilleries but this time no explanation about the steps but a continuous involved narrative about the special-ness of Bruichladdich and the way they do things there. Nothing has been changed in the production process since the distillery started in 1881. All the equipment is the same and only a few things have been changed/updated. No high-tech gadgets was found anywhere and we were shown the logs of all the distillations dating back several months to prove Mark’s point about the ever changing way the spirit behaves. 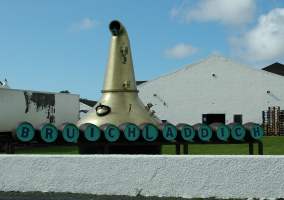 At Bruichladdich there’s no set cut-off point for the Head to Middle Cut and from Middle Cut to Feints. All is done by eye by the experienced people working at the distillery and careful logs are kept at how long the middle run lasted and at what alcohol percentage the cut started and ended. Of course we saw the mill, the stills, the wash, the wort and Mark also took us to Bruichladdich’s experimental warehouse where they to trials with different types of wood and finishes. If there ever was a man passionate about wood it’s Mark. Some of the thing he told us about the way the whisky industry as a whole “misinforms” it’s customers about the maturation and labelling of their products was eye-opening. We have a score of pictures from the 2½ hours we spent with Mark who was so kind, information and friendly that everything else palled. The only slight problem was his rather annoying dog, Badger, who was very playful and had a nasty habit of biting your hand if you played with him.
Well – just as we said goodbye to Mark and had just been given a wee dram at the Visitors Centre Jim McEwen showed up. He was another of the directors at Bruichladdich and he took us to the Still Manager, Duncan’s, office where we were shown the plans for resurrecting the Port Charlotte distillery. We were told that the fate of the project was to be decided next week on a board meeting and that all was ready to go. The only doubt was the name of the “new” distillery but the only suggestion so far is “Port Charlotte”.
With that an incredible visit to Bruichladdich ended and Christine took us to a small café next to the distillery where we had lunch and coffee.
The trip continued after lunch to the site of the old Octomore distillery. We drove up there and met Jim who now owns the farm where the distillery used to be. (It closed in 1841). Some of the buildings were still there and pictures of those will be available soon. Jim showed us around his home, his unbelievable filing cabinet full of whisky and also served us a wee dram on his balcony overlooking the bay and Bowmore on the other side of said bay. Again the friendliness and openness of the people of Islay was astonishing. Of course it helps when you are driving around by a well-connected Lady of the Isles but still… Next stop was Port Charlotte where we couldn’t get in. We did mange to get a  lot of pictures from the outside. From there Christine wanted us to see Portnahaven. And were we in for a pleasant surprise. At the end of everything we came across this incredible picturesque little village situated right on the rocky coast of Islay with a splendid view to Ireland. We spent about an hour’s time there enjoying a pint in the beautiful sunshine. Thank you so much Christine for showing us this little warm wonderful spot on this earth.
It was getting late and we still had our entire luggage in the Silver Bullet (Christine’s car). We headed off to Bridgend but stopped at Newton and Daill where there also were buildings to photograph that used to be distilleries. At Newton we were again lucky enough to meet the current resident who was ever so friendly and gave us plenty of information about where things used to be 100 or some years ago.
Finally we reached Bridgend where we checked into the very nice and cozy hotel Bridgend. Coincidentally the current B&B right across the road was also a distillery once and you can be sure you will soon be able to find pictures of everything here at AWA.dk.
For now the hour is late. We have had dinner and is now sitting writing in the Cocktail Bar and are soon off to bed.

From Islay: it’s GI and CP signing off.